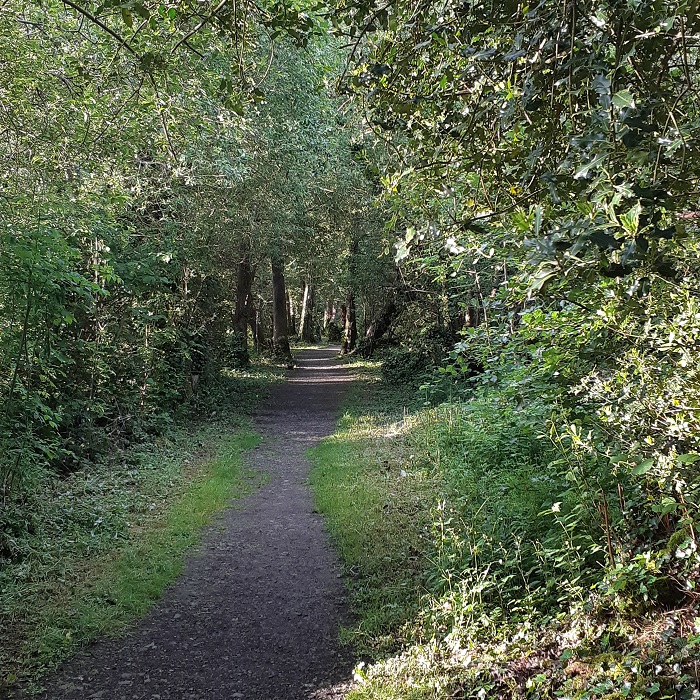 Tomnafinnoge Woods near Tinahely, Co Wicklow, are a walker’s treat. I’m biased, as I live near them, and regularly walk beneath the umbrella of oak trees. Winter or summer, you can seek cover or shade here.

There are three walks at this end of the woodland, and the River Derry will keep you company as you head west. There’s a straightforward over and back River Walk (total 4km). In addition, you can combine the River Walk and one of the two looped walks (1.3km and 3.2km respectively). During May, keep an eye out for the sea of bluebells. Most other times, the odd deer will dash past.

The carpark is one end of the Railway Walk which takes you in the opposite direction towards Tinahely. The Railway Walk runs along the original Shillelagh to Woodenbridge railway track. The rail line was opened in 1865 by the Dublin, Wicklow and Wexford Railway. It joined the Dublin-Rosslare line at Woodenbridge. Shillelagh railway station would have been used to ferry the lords and ladies of Coolattin House to Dublin. And also to service the house with supplies. So there’s a lot of history attached to it. The house was the seat of the Fitzwilliam’s extensive Coolattin estate, which extended into Kildare and Wexford counties.

The history of the woods is fairly impressive. Timber from the forests can be found in Kings College, Cambridge, and later for Westminster Abbey. In Ireland, they were used in St Patrick’s Cathedral and Trinity College Dublin seemingly. Timber from the woods was also used in shipbuilding. So, who knows how many ships sailed the high seas made of Shillelagh tinber?

Along with oak, there are beech trees and Scots pine, with holly and hazel adding to the mix. As I said, the bluebells make the place a pure pleasure in May. Add in the colour of the rhododendrons and you’ve got a nice mix.

The walks are well travelled, with families, joggers, dog walkers, and bird watchers. With the green canopy overhead, the river alongside, and the sighting of squirrels and deer, it makes for a hidden gem here in South Wicklow.