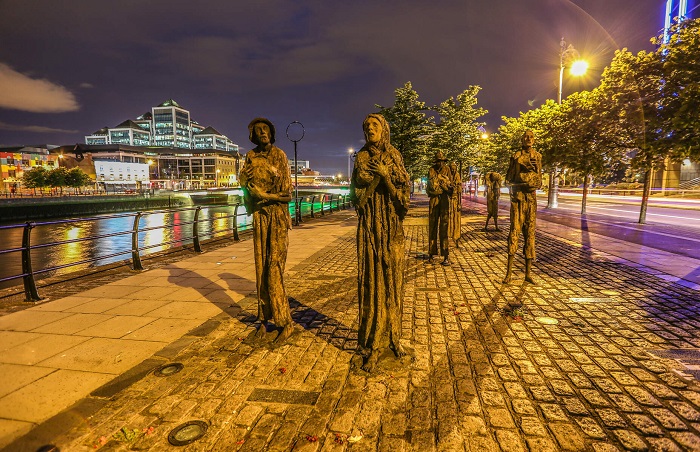 The 165km National Famine Way follows in the footsteps of 1,490 people from Strokestown, Co. Roscommon, who walked from Strokestown to Dublin and were then transported to Liverpool.  This happened in May 1847, the worst year of the Famine. Then, they boarded some of the worst “coffin ships” which took them on a nightmare journey to Quebec in Canada – only half of those who set off arrived in Quebec.

The group of walkers, who subsequently became known as the “Missing 1,490”, were tenants of the local landlord, Major Denis Mahon, who offered them a grim choice. They could emigrate (through “assisted passage”). Or stay and starve on their blighted potato patch farms. Or they could get a place in the local workhouse.

The story of the #Missing1490 has led to a research programme by the University of Toronto to uncover the life stories the ‘#Missing 1490’ which is slowly following family threads in America and Canada.

As part of the trail, a 14-page passport and guide is available to buy for €10, with 27 stage stamps that can be collected along the trail. A completion certificate is awarded at the end of the Trail at EPIC The Irish Emigration Museum.

Mostly along the Royal Canal, the Trail is designed to be accessible for families, schools, casual walkers and cyclists, through to famine and historical enthusiasts. It will be open 365 days a year, so you can pace yourself with Guide. Signposting and trailheads along the route will keep you informed too.

Walkers/cyclists are also given a ship ticket and information on one family whose footsteps they will follow, making the Trail especially evocative.

The new Passport/Guide is centred around the walk of one of the original famine walkers from Strokestown Park. Twelve–year-old Daniel Tighe remarkably survived the horrific journey to Quebec, Canada on one of the worst famine ships. Award-winning author Marita Conlon-McKenna has written vignettes reimagining Daniel’s journey in 1847 and connected to over 30 pairs of bronze children’s shoes interspersed along the route.

The National Famine Way is a collaboration between the National Famine Museum, Waterways Ireland, and County Councils along the route. The Trail is topped and tailed by iconic museums – The National Famine Museum at Strokestown Park and EPIC The Irish Emigration Museum/Jeannie Johnston Replica Ship. The Passport/Guide explains the historical and cultural landmarks, broken down into distinct sections from 1km to 15km, through Roscommon, Longford, Westmeath, Meath, Kildare, Fingal, ending in Dublin City Centre.

To book your participation along the route, or for more information, please go here. Although walkers and cyclists can avail of the Trail for free, the passport is on sale for €10 and available online and from the National Famine Museum at Strokestown Park.  In addition to the passport stamping, guide and map, it also offers discounted access to Strokestown Park House, Croke Park Museum, the Jeannie Johnson Famine Ship and EPIC The Irish Emigration Museum.

A stroll through Limerick’s Medieval Quarter
Walk in the footsteps of history at Johnstown Castle, Wexford
Follow in the steps of Arthur Guinness on the Guinness Storehouse Tour

2 thoughts on “National Famine Way stretches from Roscommon to Dublin”