Saltee Islands – a haven of calm and birds in Wexford

The Saltee Islands in Co. Wexford are a haven of calm and birds, including the island’s famed puffin residents!

They’re a treasure hiding in plain sight, just 5km off the coast of Kilmore Quay. The bird sanctuary – home to the aforementioned puffins, along with gannets and gulls – are a magnet for bird watchers and photographers. 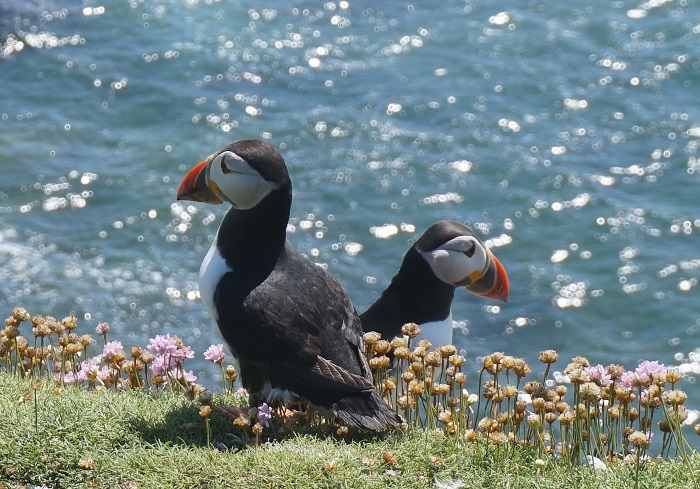 No matter which way you look, the Saltee Islands are stunning.

Bird colonies on the Saltee Islands

And, rightly so! We took a day trip to the Great Saltee and were blown away by the dramatic cliffs, the stunning scenery. The birds all keep to their own colonies on the cliff faces and are clearly used to human visitors. I was amazed at how many puffins there were, how close they stand to you, and how small they are! Naturally, you have to respect their space and nesting – this is their home, after all, and we are just visiting. 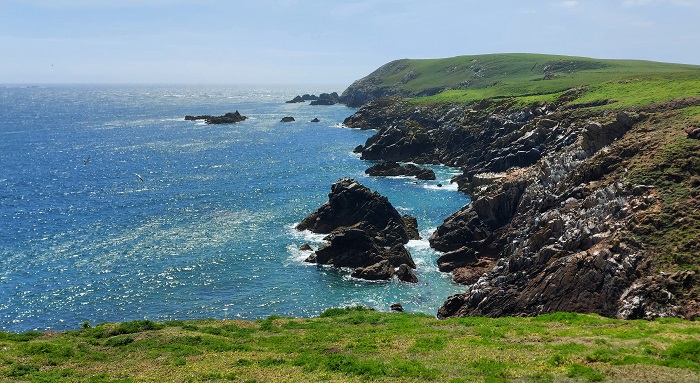 Once you get on to the island (more about that later!), the terrain is very even for the most part. It’s soft and grassy, with ferns growing across the island. No trees, just boulders, birds, and bluebells. Heading across the island, past the puffins to the south, there is a climb (no steps) but, other than that, it’s very easy underfoot.

And stunning. On a clear day, you can see back along to the sandy beaches of the south Wexford coastline. Kilmore Quay back on dry land awaits with fish and chips for dinner and ice cream for dessert! The Little Saltee basks in the sunshine, as us humans marvel at the biodiversity on its sister island.

Seals and sunshine, bluebells and birds 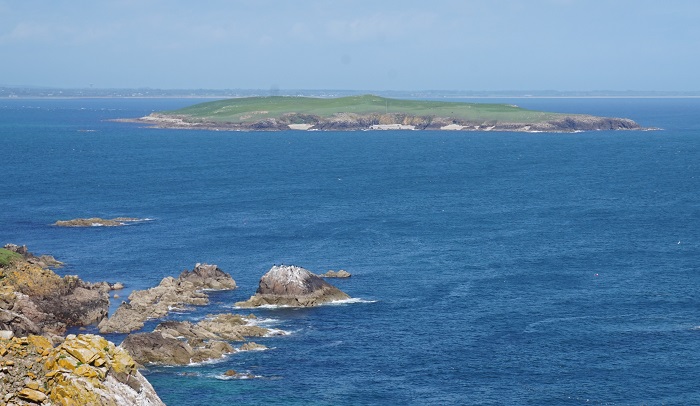 The Little Saltee Island – as seen from the bigger sister island, the Great Saltee.

Not surprisingly, this is a special area of conservation, and you may also see a grey seal swimming by (we did!). The islands are on a migratory route for birds, and a breeding ground for fulmar, guillemot, and razorbill.

It’s also largely unpopulated – there’s only one house on the island, belonging to the Neale family. Michael Neale bought the islands in 1943, and dubbed himself Prince Michael the First. There’s even a throne on the island, a great spot for photos! 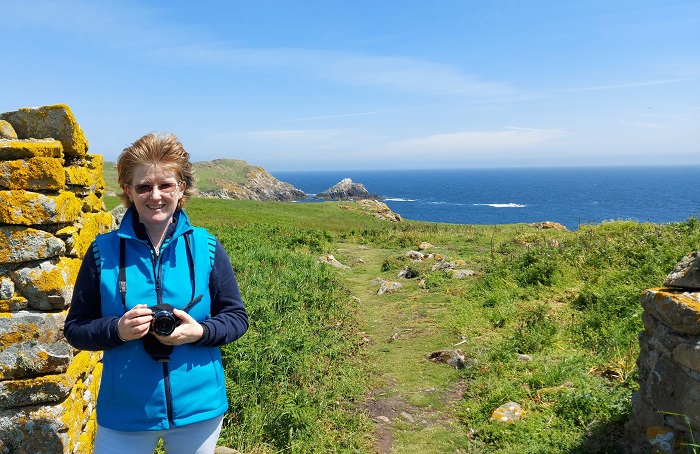 Inhabitants of the Saltees

This is a very special place – stunning scenery, nesting birds, dramatic cliffs, not a sound except crashing waves and bird calls. The entire island just begs for you to pause, and breathe in the wonder nature has laid out in front of you. It’s impossible not to be calmed by the sea, following the carefree flight of the birds in the wind.

Part of the trip outwards for us was very choppy, so be warned. At the island, you step down onto a dinghy which takes you the last short hop to the island. There’s no jetty, so you can either hop on to the rocks or wade through seaweed (we chose the rocks), so you and yours will need to physically fit. On a sunny day, it won’t take long to dry off, but on a wet day …

We were lucky – not so wet on a sunny day, lunch packed, camera at the ready, puffins posing. What more could you ask for! 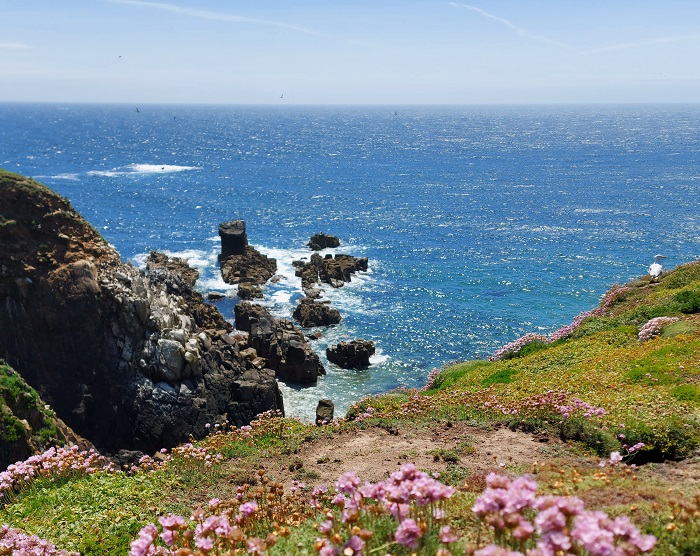 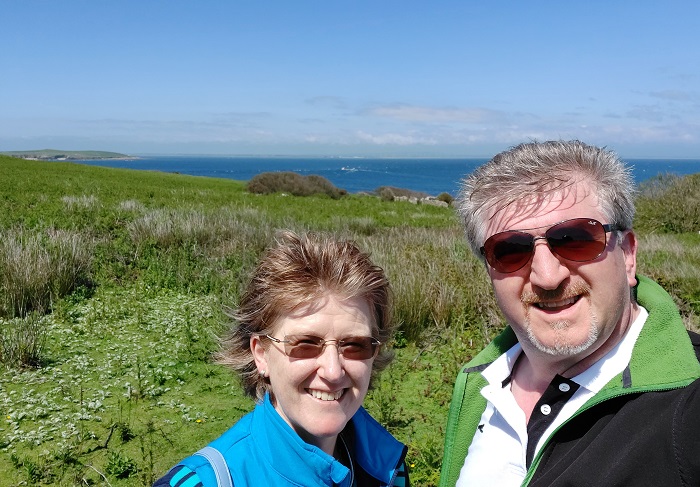 Windswept wet hair with the Little Saltee visible in the background.

Things to see near the Saltee Islands 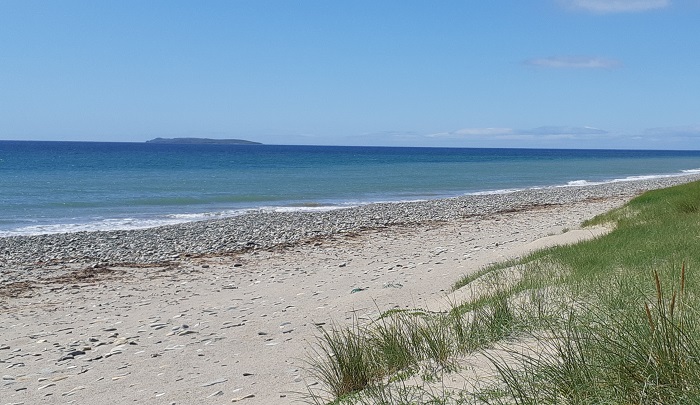 There are plenty of food options in Kilmore Quay, including the Wooden House Hotel, where we stayed overnight. Walkers might like to add in Ballyteige Burrow, one of the finest sand dune systems in the south east. We loved Ballyhealy Beach on our last visit – miles of sand, with views of the Saltee Islands as a bonus. 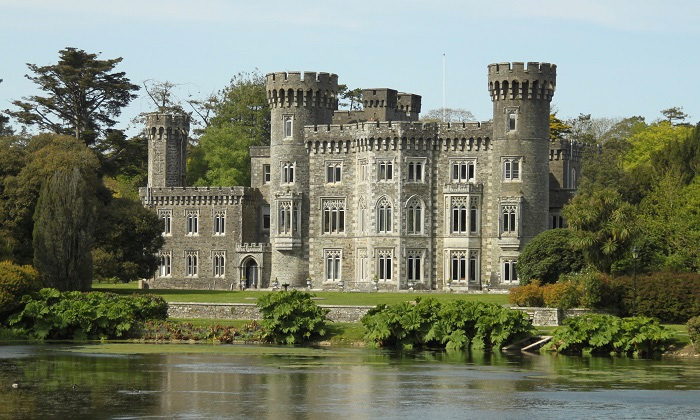 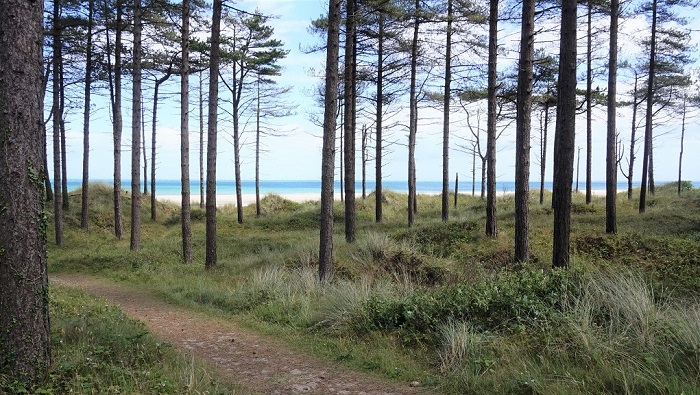 Raven Nature Reserve in Curracloe: home to the magnificent Curracloe Beach to the east. And, on the west, sheltered by the Corsican pines of the Wood, lie the North Slobs. The Slobs are home to wild goose populations in winter, making them an important habitat.