Lismore – walk in the footsteps of pilgrims and paupers

Lismore in Co Waterford is a wonderful step back in time. A heritage town, you’ll find many of the shop fronts just as they were for decades. Overlooking the River Blackwater and backgrounded by the Knockmealdown Mountains, it’s a delight to wander around. It’s also home to Lismore Castle …

There has been a castle in Lismore ever since 1185 and it was once owned by Sir Walter Raleigh. Now owned by Lord and Lady Burlington, the Castle itself is off limits to the public. You can visit an Art Gallery in the renovated West Wing (and get teas, coffee, and cake or biscuits). And, you can do a virtual reality tour of the Castle in the town’s Heritage Centre.

The Gardens at Lismore Castle are well worth a walk around. They are said to be the oldest continually cultivated gardens in Ireland. And they are a delight. I don’t know much about flowers, but I loved the wildflowers just as you enter the gardens. 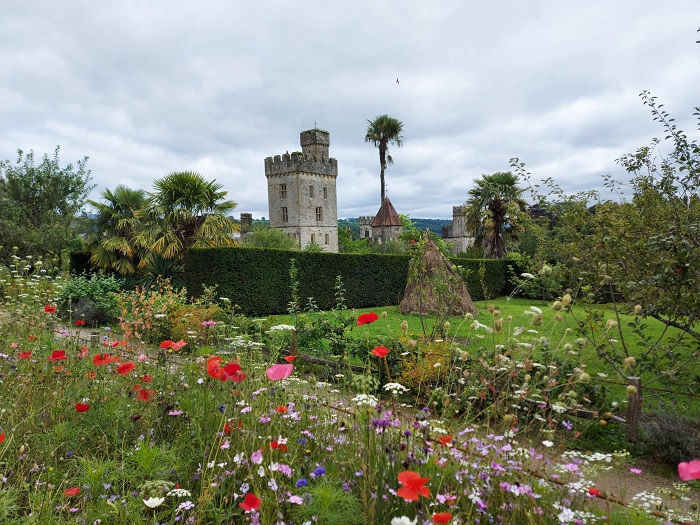 Wildflowers with Lismore Castle in the background

This Upper Garden dates from 1605 and features ornamental borders, along which the ladies most likely walked! The Lower Garden was my favourite, created in the 19th Century by botanist Sir Joseph Paxton. It’s full of meandering paths, an avenue of yew trees, a fernery tucked away in a corner, magnolias, rhododendrons, shrubs, and borders. There are also sculptures installed around the gardens, so see what you make of them! 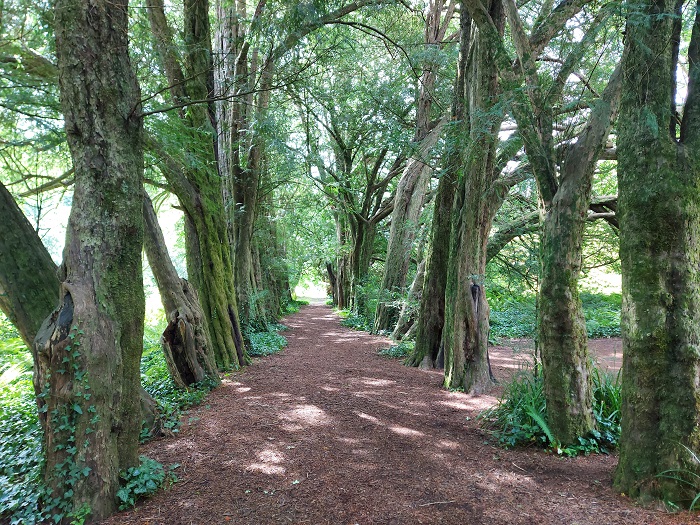 These yew trees are older than the Lower Garden itself

Note: From a mobility point of view, the Lower Garden in particular is tricky to navigate. For starters, there are a lot of steps down to it from the Riding House. Paths can be narrow and uneven and the ferny area is also stepped.

Lady Louisa’s Walk in the town is also part of St Declan’s Way – the 115km route from Cashel, Co Tipperary to Ardmore, Co Waterford. Set in woodland along the riverbank, it’s a short, easy 2km hop that takes you back into the town. Interestingly, in the town, you pass a row of 19th century terraced cottages, built by the Castle’s Duke of Devonshire for his tenants. 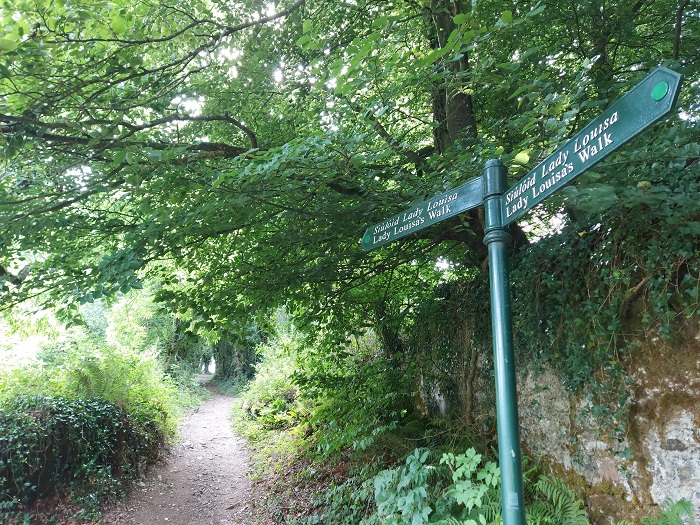 Lady Louisa herself is the most interesting person in all of this! The walk is named after Lady Louisa Cavendish, the eldest daughter of the seventh Duke of Devonshire. At the age of 14, she took on responsibility for the castle household after her mother’s death – and until her own marriage. In the meantime, she created nature trails along the banks of the Blackwater, including this one, named after her. 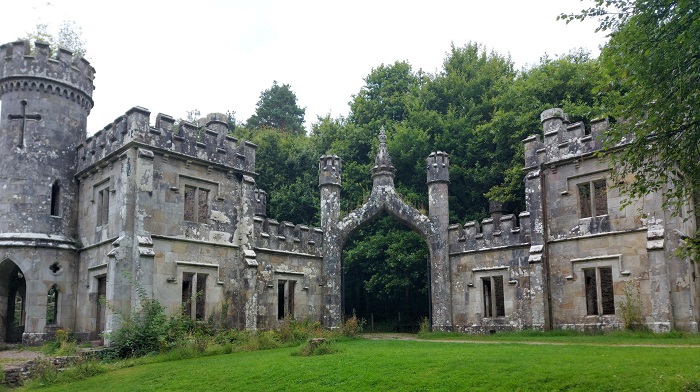 The 2km Towers Walk at Ballysaggartmore is a must! These Gothic-style towers are located in woodland 3.5km from Lismore.

The towers and gate lodges were built in 1850 by an Anglo-Irish landlord, Arthur Kiely-Usher for his wife. The lodges and main gate were built on the avenue to the family’s residence, Ballysaggartmore House, now demolished. Passing through this gate, you can follow the path along until you come to the other towers. These were built at either side of a bridge over a ravine. Seeing as these were completed two years after the Famine, you can only guess at the hardship of his tenants, while money was spent on their construction. However, today, these make this woodland walk unlike any other.

It’s an easy walk to manage, with a riverside picnic table by the towers. You’ll be able to spot poplars, rhododendron, oak, ash, horse chestnut, spruce and fir here. There are also seats along the way, so we stopped for a spot of forest bathing, listening to the river below and birdsong above. 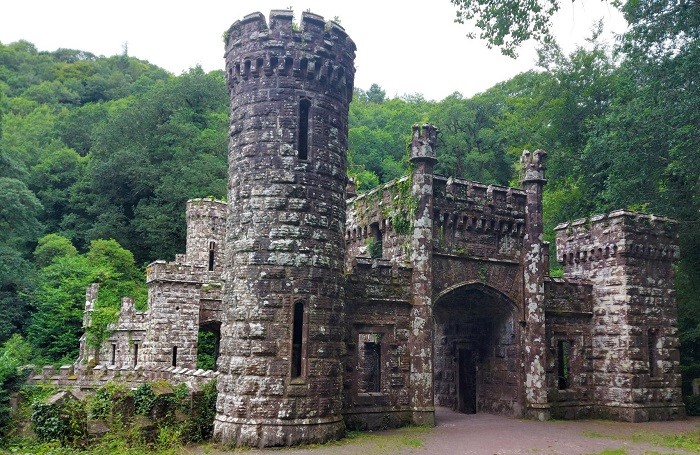 Further afield, outside Cappoquin, was the highlight walk of our few days around Lismore. There are four way-marked walks in Glenshelane Woods – we did the Grotto Walk, which is allegedly 5.5km return. I say allegedly, because when we measured the return route, it came in at about 4km. Regardless, this is a gem of a walk, running alongside the Glenshelane and Glenfallia rivers. You have the sound of the river and birdsong as companions the whole way, with plenty of place to linger. 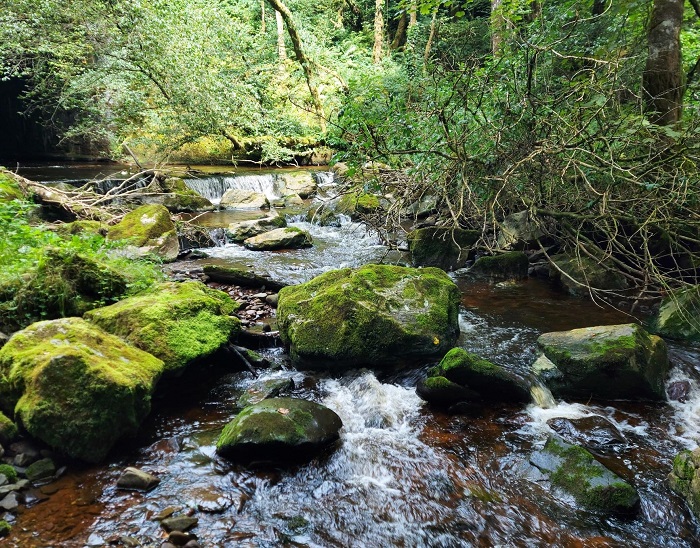 A spot of mindful walking by the Glenshelane River

If ever there was a place for mindful walking or forest bathing, this is it. We stopped plenty of times to take in the sounds of these tributaries of the River Blackwater. Surrounded by conifers and broadleaves, you can also spot whitethorn, holly, and foxgloves in the undergrowth. A crafty heron, resting on a stone, moved every time we tried to get a photograph, and we only spotted the one. 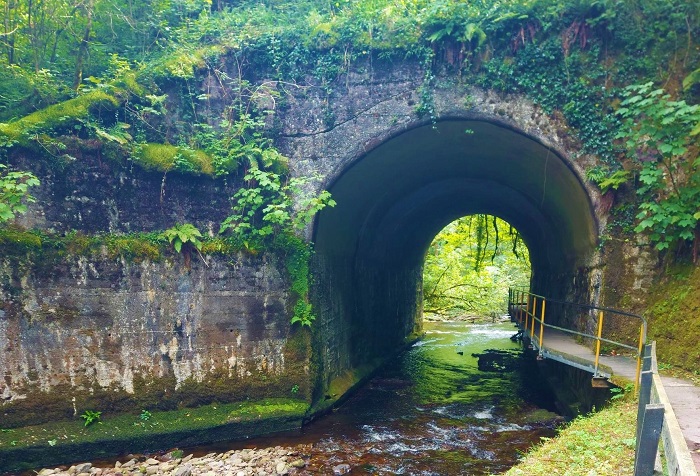 The limestone underpass beneath Lyre Bridge

The second half of the walk, alongside the Glenfallia river, is the most scenic. After the scout camp, the walk passes under the Lyre Bridge – capturing the sunlight through the underpass was a treat. Then, you come to little rapids, where the run-off from the Knockmealdown Mountains rushes over big smooth boulders. This was a delightful discovery and we stayed a while to listen to the swoosh of the water on its way. 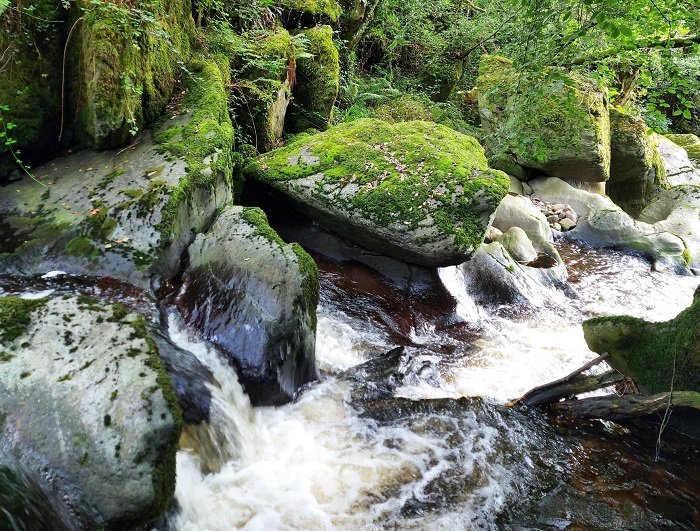 Nature at its finest as these rapids smooth the boulders in the Glenfallia River, Glenshelane Woods

The route eventually makes it way to the roadside – hang a left here, go over the bridge for the Mellary Grotto. I give directions because there was no sign at the end of the walk for the Grotto – and, of course, we turned right looking for it! The Grotto has seating for people who wish to pray, bathroom facilities, and a car park. The Grotto was the site of moving statue apparitions in 1985, when locals say the Virgin Mary appeared from 16-24 August. Interestingly, we were here on 17 August, 36 years later …

Anyways, Glenshelane Woods are a delight – walker’s tip: bring water and snacks as there are no shops nearby. 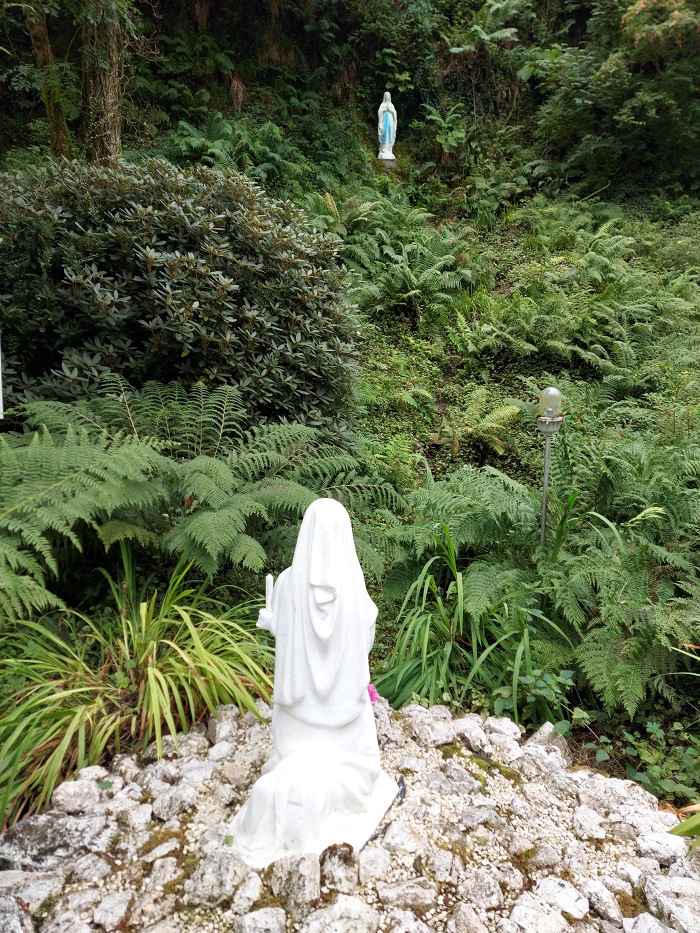 We stayed in the charming Ballyrafter Country House Hotel in Lismore. The house was constructed in the early 1800s for the Duke of Devonshire’s estate, and the views from the breakfast room are gorgeous. We found the owners friendly and helpful – and the baked egg and chorizo breakfast was amazing! 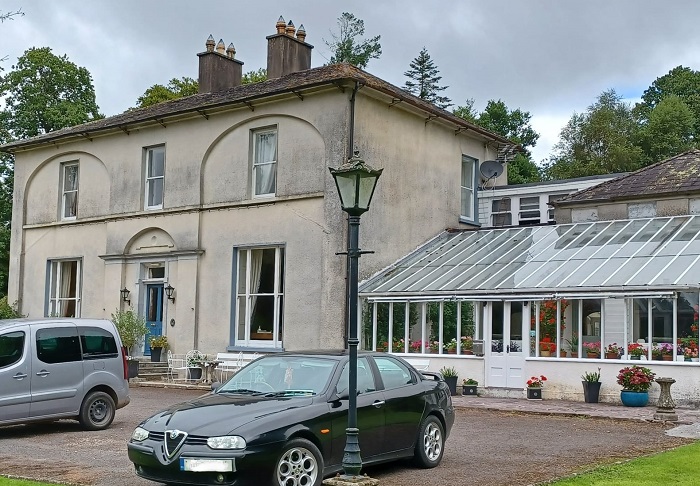 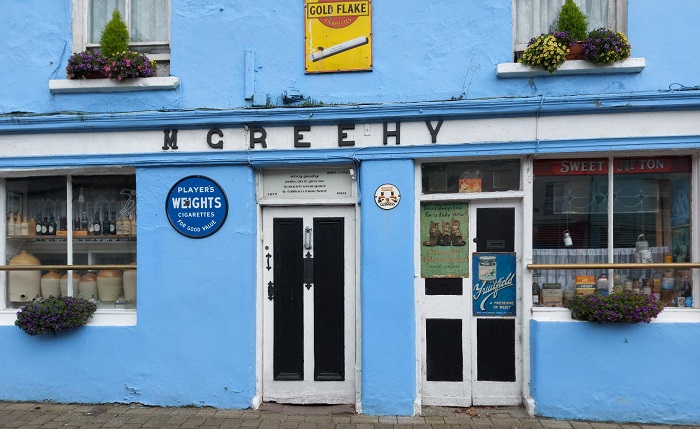 Lismore itself is well worth walking around. The quaint shop fronts, the contrast between the big houses and the tenants’ cottages. Then there’s the amazing St Carthage’s Cathedral on the Mall.

It’s simply extraordinary. Gothic gates lead you into a church that dates from 1630, though this has been a place of worship since 636. There are pointed windows, ribbed ceilings, and an amazing stained glass window by pre-Raphaelite artist Edward Burne Jones (1833-1898). If you want to pause a moment and gather your thoughts in stillness, St Carthage’s Cathedral in Lismore is made for you. 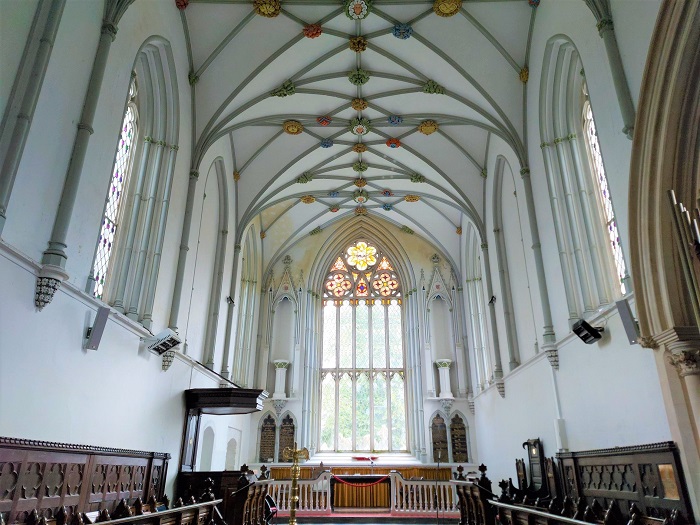 A work of art, simply stunning …

If you are visiting or holidaying here early in the week, be prepared to find places closed. We ended up travelling to Tallow and Fermoy for evening meals, and were just glad to find dining options open. Shops closed early, the sign on the café in Mount Melleray said it did not open until 2.30pm. We were advised to go to Cappoquin for much-needed water. Reader, we were walking – and Cappoquin is 6km from Mount Melleray! I know this is all part of the pandemic fallout and owners have economic arguments for closing early in the week. But it does make it challenging for a visitor to enjoy an area at its fullest.

We’ll definitely be back to explore this heritage-rich area and the Knockmealdowns. There are walks aplenty to discover. And we’ll get an opportunity to drive again through the amazing Nire Valley en route from Clonmel! 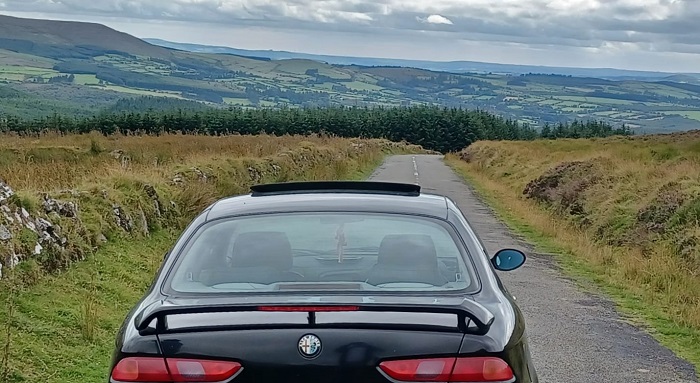 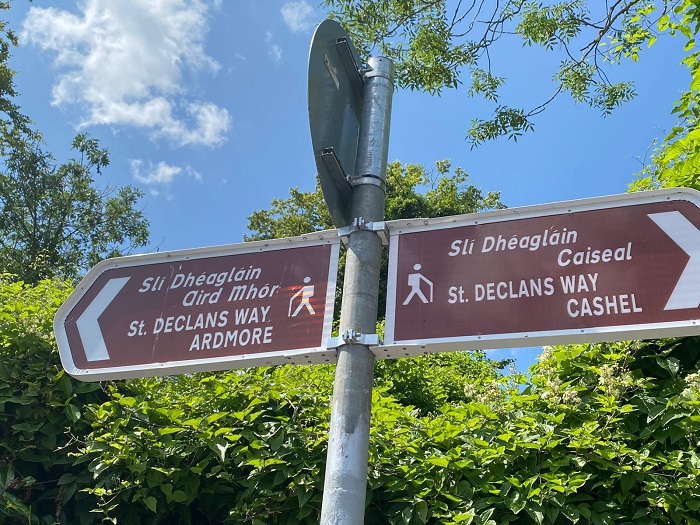 This is the stained glass window at St Carthage’s Cathedral. Extraordinary. 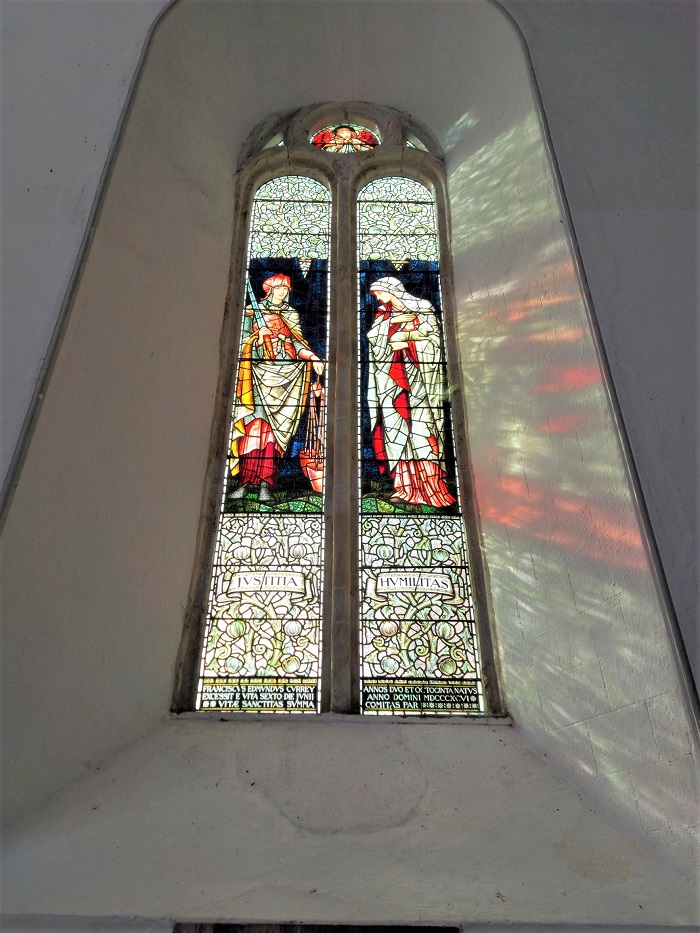