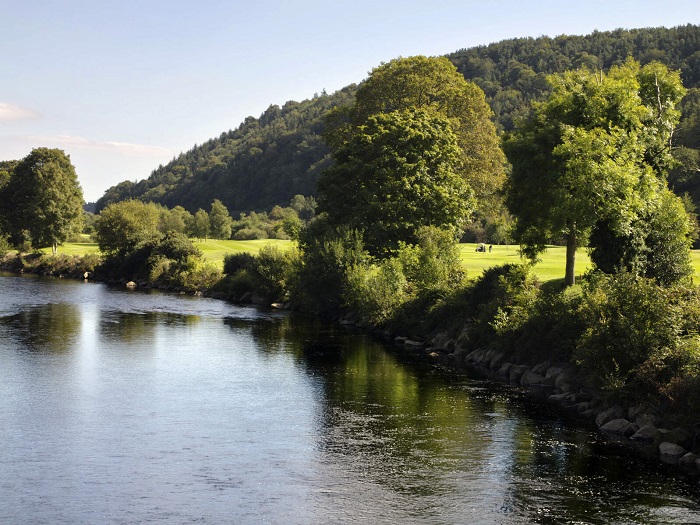 Woodenbridge to Avoca – a roadside walk that delivers history and scenery. And a footpath for the entire walk, so that’s not a bad 4km outing (actually, it’s 3.6km!).

Woodenbridge lies between Arklow and Avoca, at the meeting of the rivers Avoca, Aughrim, and Goldmine. The Goldmine river gives a hint of the mining history of the area, though it was mostly copper, lead, pyrites, and ochre that were extracted from here.

Before you leave Woodenbridge, check out the Wicklow World War 1 Memorial. Nestled among the Alder woodland, the memorial commemorates the 1,192 Wicklow men who lost their lives in the first World War. With the names listed on local granite pieces, with a curved path going through them, it’s a very evocative space. Adjacent to the River Aughrim, the site overlooks the spot where, on 18 September 1914, John Redmond called on local Irish volunteers to join the British Army and support the cause of Home Rule on the battlefields of France.

From tee to train

As you walk from Woodenbridge, you’ll see the fabulous green fairways of Woodenbridge Golf Club on the right-hand side. Dating back to 1894, the Par 71 18-hole parkland golf course, backgrounded by woodland, looks a treat!

You’ll also be walking alongside the River Avoca and the disused railway line. This line was part of the Dublin & South Eastern line between Dublin and Rosslare, passing between Rathdrum and Arklow. Shillelagh was a branch line from this to Woodenbridge, via Tinahely, giving rise to the Railway Walk in Tomnafinnoge Woods.

Along the way, you’ll come across an old church on the left hand side. Castlemacadam Church was built for the Church of Ireland community in 1819. Used until 1870, it is now in ruins but there’s plenty of the structure left. You can see upwards in the belfry, and where a spiral staircase led from the belfry to the first floor. The stonework is still in good condition, so you get a good idea of the shape of the church and windows. The surrounding graveyard is uneven underfoot but worth a look for the heritage buffs amongst you.

Onwards to Avoca, and past the new Church of Ireland church, again on the left. Avoca has two associations: Avoca Handweavers originated here in 1723 and the BBC series, Ballykissangel, was filmed here between 1996 and 2001. The latter led to busloads of tourists for a while and made Fitzgerald’s pub in the village famous.

All in all, this is a very pleasant walk! We plan on going back in the Spring when the canopy of trees on the road will be in full leaf. And, hopefully, we’ll be able to have more than a takeaway coffee in Avoca or a restorative glass of Guinness in the Woodenbridge Hotel!

Clara Vale looped walks between Rathdrum and Laragh
Walk in the footsteps of history at Johnstown Castle, Wexford