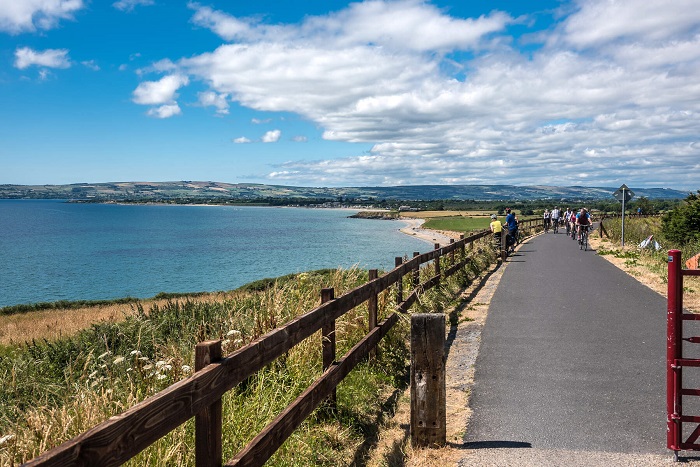 Ireland’s greenways were a haven of sanity for many in the past year. The Covid-19 lockdown had many people discovering hiking and walking trails in their locality. Of course, we’re not the only ones to love our countryside. In 2018, three million tourists to Ireland engaged in hiking/cross country walking and cycling. So, who knows when we will see so many tourists again? In the meantime, the country is ours to discover.

Not surprisingly, the country’s local authorities, government, and tourism bodies were quick to respond. Greenways have been springing up all over the place – and that’s a good thing!  Greenways are essentially trails designed for shared use by leisure walkers and cyclists.

So, here are a few greenways for you to explore.

This is a 42km traffic-free cycling and walking trail which follows the route of the Westport to Achill railway which closed in 1937. This was the first greenway really and a runaway success. An estimated quarter of a million people use the Great Western Greenway annually. Attracting 80,000 visitors who spent €7 million in its first year of operation in 2010, it has been a huge success and a case study for subsequent greenways on the entire island.

Want to discover more walks on the Wild Atlantic Way?

In fact, 280,000 people visited this Greenway from its opening to November 2019, according to Fáilte Ireland. Two-thirds of those visitors – 68 per cent – said the Greenway was the main motivation for their visit to Waterford. A nice boost for Ireland’s Ancient East.

The Grand Canal Way is 117km long. And it follows the towpath of the Grand Canal from Lucan Bridge, near Dublin’s Adamstown, to Shannon Harbour. Traversing through counties Dublin, Kildare and Offaly, visitors will come across the locks that kept canal traffic afloat and lock-keepers’ cottages that kept the commerce on the route in the 18th and 19th centuries ticking over.

The 146km Royal Canal Way goes from Ashdown in Dublin, through Kildare, Meath, and Westmeath to Cloondara in Longford. Work is ongoing on the towpaths, so the entire route is not fully accessible.  When it is completed, 90km of the Royal Canal Way will form part of the proposed Dublin to Galway East-West Link.

Walk in the footsteps of the movies

In Praise of Walking – book review

A stroll through Limerick’s Medieval Quarter

One thought on “Greenways – discover these walking gems”